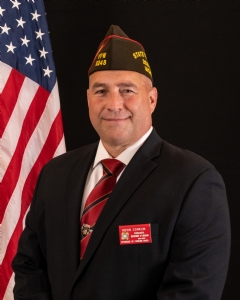 I joined the United States Army Military Police Corp in September of 1989.  I completed basic  and advanced training with the 795th Military Police Co in Ft McClellan, Al.  My first duty station was Ft. Lewis, Washington with I-Corp 170th MP Company.  While there I deployed to the Republic of Panama and Honduras.  I was also assigned to CID where I took part in undercover narcotics operations.  I was then assigned to the 2nd Infantry Division, Camp Casey, Korea where I earned my eligibility to the VFW.  My last duty assignment was with the Screaming Eagles, 101st Airborne Division, Ft. Campbell, KY.  After obtaining the rank of sergeant E-5, I was honorably discharged in 1993 to attend college.

I joined VFW 6248 Celery City Post as a Life Member in 1993 where I am a current member.  I have gone through the chairs at the post and district levels.  I was elected District 7 Commander in 2011-2012 and 2015-2016.  I was then elected three consecutive years as your Department Judge Advocate. I served as a member of the Department By-Laws and Resolutions Committee, Department Parliamentarian, and Public Relations Director.  Nationally I was appointed to the National By-Laws and Resolutions Committee 2015-2019 and National Aide De-Camp 2010-2011.
I retired from the Michigan State Police after 24 years of service as a Detective Sergeant in 2019.  I am currently serving as the Van Buren County Undersheriff.  I am also an adjunct instructor for the KVCC Police Academy.
I have earned an Associate Degree in Criminal Justice from Kalamazoo Valley Community College and a Bachelor's Degree in Public Safety from Siena Heights University.
My family includes, my wife Makrina, two daughters Brianna and Amanda and two step sons Cameron and Jordan.
Let's have a great year working together to foster true patriotism and continue the great traditions of the Veterans of Foreign Wars.