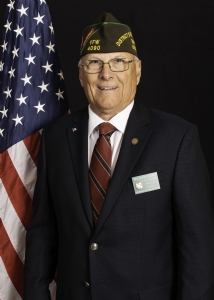 Bill graduated from Portland High School in 1968, and was drafted into the U.S. Army in September of 1969.  In February of 1970 after completing AIT training at Fort Polk, La. Bill received orders for Vietnam where he was assigned to the 5th Infantry Division as a light weapons infantryman (11-B MOS).

His unit was stationed primarily in Quang Tri Province. The unit operated from the DMZ, Dong Ha, Phu Bi, Hue, Con Thien, and the mountain area of Mai Loc.  He returned home on December 22, 1970.

Bill was then issued new orders to Fort Knox, Kentucky, where he was assigned the duties as "Training NCO” and later as a "Tank Commander” with the 32nd Armor Division.

In 1973, Bill married Connie and have been happily married now for 49 years. Together, they have three children and six grandchildren.

He received his Bachelor of Business Administration (BBA) degree from Northwood University in 1997.

In 2012, Bill retired from General Motors with 31 years of service as a Toolmaker.

Bill and wife Connie enjoy camping during the summer and in their spare time look forward to watching their grandchildren grow and achieve great things.  With two grandsons playing football and baseball, one granddaughter playing softball and basketball they  will continue to have a busy schedule for many years, with their grandchildren, their church and the Veterans of Foreign Wars.