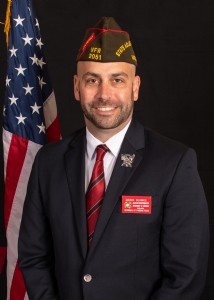 Derek Blumke is the State Adjutant & Quartermaster of the Veterans of Foreign Wars, Department of Michigan. Derek served 12 years combined between the United States Air Force and Michigan Air National Guard. During this time he deployed three times to Uzbekistan and Afghanistan with the AC-130H Spectre Gunships in support of the war on terror.

In 2007, Derek founded the Student Veterans Association at the University of Michigan, and shortly after, co-founded Student Veterans of America (SVA). During his time with SVA, he served as the President and Executive Director, where he led the organization’s lobbying efforts, working alongside the Veterans of Foreign Wars (VFW), to pass the Post 9/11 GI Bill through Congress. SVA is now the largest community based organization of Iraq and Afghanistan veterans in the country, hosting chapters on over 1,500 campuses, in all 50 states and in 4 countries around the world.

Derek went on to found a New York City based technology company; served as an executive at two other NYC based tech startups; was the founding director of the Department of Veterans Affairs national mental health program, The VITAL Initiative; was a founding committee member of the National Action Alliance on Suicide Prevention, a member of the American Legion’s National Centennial Committee; served on the American Legion Department of Michigan’s Post Development, and Post Traumatic Stress/ PTSD Committees; and was the Editor of Veterans and Military Families for the mental health website, Mad in America.

For his work, Derek has received the Presidential Volunteer Service Award, and was recognized at the White House by President Barack Obama for his leadership in supporting returning military veterans.

Derek graduated from the University of Michigan with a double major in psychology and political science.