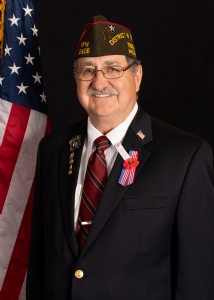 In 2006-2007 while he performed the duties as District 8 Commander, Gary became the only All-State District Commander in the Department of Michigan in his year.  Gary has served in numerous VFW Department of Michigan directorships and national chairman appointments during his tenure and was awarded All-State Post Commander on his last post position. Gary has achieved honors on the Department Recruiting Team for years 2020, 21 and 22.

Gary retired from the United States Army as a Sergeant First Class E-7 as a Sr. Personnel Administration Sergeant.  Gary served in Viet-Nam, Korea and Germany and has over 21 years of Active-Duty Service.  Gary graduated college with a Master of Arts Degree in Organizational Development and also has a Bachelor's Degree in Management and Organizational Development from Spring Arbor University.

Gary is married to his beautiful wife Blanche Brown and between the two of them they have five children, 12 grandchildren and one great-grandson. Gary is a Life Member of Maple City VFW Post 2406 in Charlotte, MI. Gary also teaches beekeeping to disabled veterans at his VFW Post through a program called "Heroes To Hives”, and currently has four hives at his post for hands-on training to first time beekeepers. This is Gary’s 2nd time serving as the District 8 Commander and he plans on bringing his district to the top of the District standings upon the completion of his tenure.