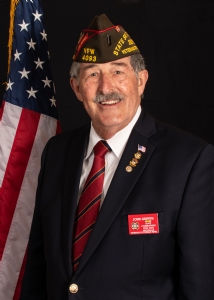 Following graduation form Westminster High School, Westminster, California in 1968 I joined the US Army and was trained as a Military Police Sentry Dog Handler, serving with the 981st MP Co. (SD) in Phan Rang, Viet Nam in 1969.

Returning from Viet Nam, I pursued my Army career while attending college during my off-duty time, obtaining an Associate’s Degree in Criminal Justice from the University of Maryland, and Bachelors degree in Business from Columbia College.  In 1971 I became a Special Agent with the Army Criminal Investigation Division (CID) at Ft. Benning, GA, eventually being promoted to Warrant Officer.

Having completed two tours in Germany with alternating assignments to Ft. Campbell, KY and Ft. Leonard Wood, MO, I left active duty to pursuit a career in civilian Federal Law Enforcement while remaining in the Army Reserves.

While serving in the US Army Reserves with the 300th MP Command (EPW), Inkster, MI, with subsequent assignment as Operations Officer to the 323rd MP Detachment (CID), Jackson, MI, I was selected and accepted promotion to Chief Warrant Office-Five. After completing 32 years of military service in 2001, I retired from the US Army Reserves.

As a Special Agent with the US Treasury Department Bureau of Alcohol, Tobacco & Firearms (ATF),  I conducted federal investigations on narcotics, firearms, arson and explosives violations. I performed in additional capacities as a Crisis Negotiator for the Special Response Team, Tactical Operations Officer and Post 911 as member of the FBI Joint Terrorism Task Force. Additionally, I served on personal protection details for several Presidential Candidates along with a host of foreign heads of state during assignments at the UN General Assemblies.

In 1990 I became a member of Kozdron VFW Post 4553, now Kozdron-Zeyer Post.  In 1994 I transferred to Carleton VFW Post 4093 where I became a Life Member. Since that time, I served at multiple positions from Post to National levels of the VFW.

My wife Kris Griffith, who also served in the US Army, is Past VFW 6th District Auxiliary President.  Kris and I remain active and committed to serving the VFW and our fellow veterans.