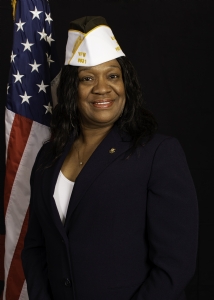 Kimberly A. Napoleon is a 1986 Graduate of Arthur Hill High School, in Saginaw, Michigan. She served this country as a member of The United States Army from 1987 until 1996. She served during Operation Just Cause, Operation Desert Shield /Operation Desert Storm, commonly known as "The First Gulf War/Persian Gulf War.”

She is a also a Life Member of Disabled American Veterans where she also served as Post Commander from 2014-2016 as the first Female Commander.

Kimberly is also a member of American Legion Post 439.

She also has membership with The National Association of Minority Veterans of America.

Kimberly serves as a peer leader with the National WoVeN network of women Veterans and its BRIDGES program, which supports Women Veterans within 1 year of transitioning from their military service.

Kimberly is also a part of Women of Colors, Member of Kappa Epsilon Psi Military Sorority, Inc. Winter ’21 NL Zeta Epsilon and her local  Chapter is Detroit Omicron.  Kimberly is also a founding member of Impact100 Global Veterans, a philanthropy organization committed to awarding Veteran centric organizations grants to continue their programs of work and is a member its Board of Directors. Kimberly is also a certified Suicide Prevention Specialist/Gatekeeper with QPR (Question, Persuade and Refer)

Kimberly is the widow of US Army Veteran Mr. Terrill Napoleon and the proud Mother of one daughter, Ms. Ti’Kyra Napoleon of East Lansing Michigan.